Presidential nominee Joe Biden’s campaign has proposed many major tax reforms as we near the November 2020 election. Much of this reform targets the legislation enacted by President Trump’s Tax Cuts and Jobs Act (TCJA) of 2017. While these are just proposals for the time being, they provide significant insight into the presidential nominee’s position on our tax system and the types of reforms his regime may consider if elected President. And of course, much depends not only on Biden winning his election bid, but also on who gains (or holds onto) control of the Senate. The following is a high-level summary of some of the proposed changes that would have significant effects on closely held businesses and owners – not just corporations and the wealthy. 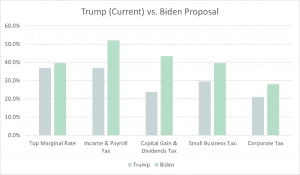 In addition to these major changes, Biden’s proposal includes two key changes that affect the next generation. The first is the elimination of stepped-up basis on inherited property. It is important to note that eliminating the step-up in basis on inherited assets affects more than the top 1%. Currently, there is no tax on inheriting estates with appreciated assets such as real estate. The proposal outlines that heirs would inherit the decedent’s basis and pay gains on realization. If, for example, a person purchased a home for $400,000 that is worth $1.5 million at the time of their death, their heir would pay capital gains on anything over $1.5 million. This “step-up” in basis would be eliminated meaning if the heir sold the home for $1.6 million, they would pay capital gain tax on $1.2 million.

The second main change for estate and tax planning surrounds the unified gift and estate tax exemption. The proposal reverses the TCJA lifetime exclusion of $11.58 million per person back to the pre-TCJA amount of $5.49 million (to be adjusted for inflation). Depending on the outcome of the November election, individuals this would affect may want to consider using as much of their exemption as possible in 2020 to provide meaningful federal tax savings to their heirs. Should the exemption be cut in half, anything above this threshold would be taxed at 40%.

It is important to note that the Democratic candidate has proposed new and enhanced existing tax credits for individuals, families, and certain businesses. Proposals include expanding the Child and Dependant Care Tax Credit (CDCTC), providing a Firt Time Homebuyer Credit, and shifting the tax benefits of deferrals into traditional retirement accounts towards lower and middle-income earners. Overall however, a model run by TaxFoundation.org finds that the plan as proposed would reduce GDP by 1.47% over the long term, lead to a 1.7% decline in after-tax income on average for all taxpayers, and lower after-tax income for all income levels by 2030. Whether you are in the highest or lowest income tax bracket it is important to consider how these proposals would affect both your family and the economy – and to be ready to adapt your financial plan to whatever tax regime will exist in the coming years.

Steve Olson’s experience spans over a decade of focused tax planning, legal strategy interpretation, investment management, and advisory services to wealthy individuals and families throughout the U.S. Over the course of his still young career, Steve provides counsel and management on individual assets and portfolios—encompassing a combination of securities, real estate, privately held businesses and other alternative investments—ranging in value from $5 million to over $400 million in value.

What To Do With Your Promissory Note Before Year-End